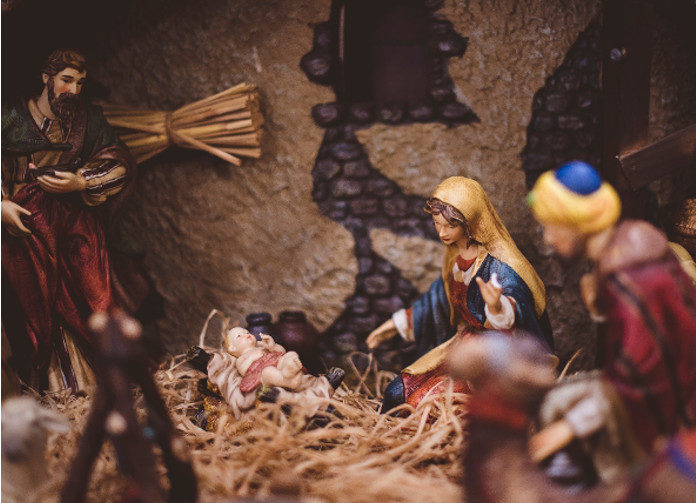 As the air gets slightly colder outside and indoors starts feeling like the inside of a refrigerator, the island starts to take on a more Christmassy atmosphere, and people start preparing for the season.

Naturally, there are islanders on both ends of the Yule-enthusiasm spectrum, from the ones who turn their houses into visible-from-space light sources, to those who do not celebrate the holiday season all. Malta being the Catholic country that it is, most of the celebrated Christmas traditions here are Catholic-related or have roots thereof.

The most ubiquitous of Christmas season changes on the island is the hanging of decorative street lights. These usually go right above the roads, at heights usually starting from around 6 metres.

The most distinct feature of such street lights is that rather than soft, glowing lights, they are epilepsy-inducing blinking lights, some of which are flashing so frequent they could be a major driving distraction.

Residents also decorate their houses with lights, from simple static lights in windows to whole balconies covered with blinking rope lights. There are also those who are, ahem… overly enthusiastic about lighting up their dwellings.

Ġulbiena is a word that definitely evokes memories of Christmas time for the Maltese – also known as Vetches, these are the stringy, noodle-like shoots of particular species of Vicia pulse seeds and are grown for decorative purposes.

They are purposely grown in the dark (usually by soaking seeds in water first then placing on damp newspaper or cotton wool) so as to the keep their colour white and their shape stringy. Generally, Ġulbiena is planted in the first week of December to be at its best for Christmas Day, and is brought out in its container and placed at floor level or on tables around other decorations around a week before Christmas Day.

A tradition that is nowadays only followed by the older generation is the displaying of the households’s Baby Jesus figure – it is, after all, the birth of Christ that Christians celebrate during this most important religious holiday, so some homage to their deity is to be expected.

The statues, sometimes very valuable due to their antique status, are taken out of storage, given a good cleaning and placed in a manger (structure used to hold food to feed animals) or similar structure, which is then placed in a prominent location in the house.

Wood chippings, sawdust or actual hay is placed in and around the manger for authenticity, and in most cases some lights are placed around for effect. The aforementioned Ġulbiena is also placed around the exhibit for decoration.

Owing to the British influence over the Maltese Islands is the tradition of baking mince pies during Christmas. Mince pies are called so due to them being filled with mincemeat, which although sounding like something you would expect to find in a hamburger, is actually a mixture of chopped dried fruit and spices (Although originally it did contain meat).

Without a proper Maltese name and simply known as “mince pies”, these typically cupcake-sized pastries are baked around the whole month of December and are served as dessert (especially after Christmas Day Lunch, another Maltese tradition), but are also consumed at any other times of the day, particularly when combined with another Maltese all-season favourite, black tea with milk.

The top parts of mince pies may have different decorative features, and some might have icing sugar added to them for that extra sweet taste. Maltese kids are very fond of helping out their parents with preparing the pies, be it the washing of the pies with egg or milk mixture or the crimping of the top crust to the sides.

In Malta, food has a very special meaning to almost everyone on the island. One of the best examples of this is Christmas Day Lunch, which is the de facto Christmas celebration meal, or rather a banquet, held here.

This is at minimum a 5-course meal including appetisers, soup, lasagna or other pasta, typically turkey or capon (castrated cockerel fattened for eating purposes) which might be baked at a local bakery if too big for a regular oven, with potatoes and vegetables. This is followed by dessert and coffee plus optional liquor, unless you are in a food coma already by that time!

Christmas Day Lunch is attended by extended family members including Grandma and/or Grandpa, Aunts and Uncles, Cousins, and everyone’s partners. The sheer number of people coupled with free flowing alcohol means these lunches tend to get quite loud, with everyone trying to outshout the next person and/or laughing hysterically along the way.

A note to our Northern (or introverted) visitors: despite the loudness and crowded nature of this event, it is one to be experienced, and all the natives will be very happy to have you join in their merrymaking!

A tradition with ancient roots (as far back as 1223 AD according to sources) and enjoying high popularity amongst the Catholic populus is the creation of Nativity Scenes, also known as Manger scenes or cribs.

Most Catholic families in Malta and Gozo will own at least one Presepju depicting the birth of Christ, and you can find cribs made from all sort of materials – cardboard, expanded polystyrene, wood… no material is beyond the challenge for those who decide to build their own. Tiny figures representing both humans and animals complete the scene.

Sizes also vary from “shoebox” all the way to life-sized nativity scenes that can span a whole village square. The latter has recently become a veritable attraction, and more villages are hosting their own Presepju Haj (Live Nativity Scene) and inviting all visitors to admire the display of people and real animals as they go about their daily, 2000-years-in-the-past lives.

You might notice signs saying Wirja or Wirja ta’ Presepji on streets. These point in the direction of some social club or garage that typically has a showcase (hence the word Wirja) of a number of nativity scenes for all guests to enjoy.

Mass attendance in Malta increases at Christmas, with churches packed for the Midnight (between 24th and 25th December) Mass. The celebration includes some very special changes from the norm – the sermon is delivered by a small boy or girl aged 7 to 10 much to their very eager parents’ pride, there is a procession by all the local children before or after the midnight mass where they walk into the church holding candles, and they are all dressed as nativity scene members – there’s Jesus, Mary and even the donkey and sheep.

Once the mass is over, all those present linger at the Church parvis to wish all their acquaintances a Merry Christmas before heading home for some drinks and then to bed.

According to research this tradition started in Malta in 1883 which makes it pretty old, though considering there are records of Midnight Mass being celebrated in Rome since before 354 AD it is no surprise that such an important Catholic tradition made its way onto the island.

Malta offers a varied mix of Catholic and other traditions that appeal to all folk, and although a White Christmas is not really possible on the island, it definitely presents a commensurate offering when it comes to celebrating the Christmas or Yuletide spirit.

An Ode to Dirty Malta

How to Best Cure Your NYE Hangover in Malta?

12 Ideas for This New Year’s Eve in Malta