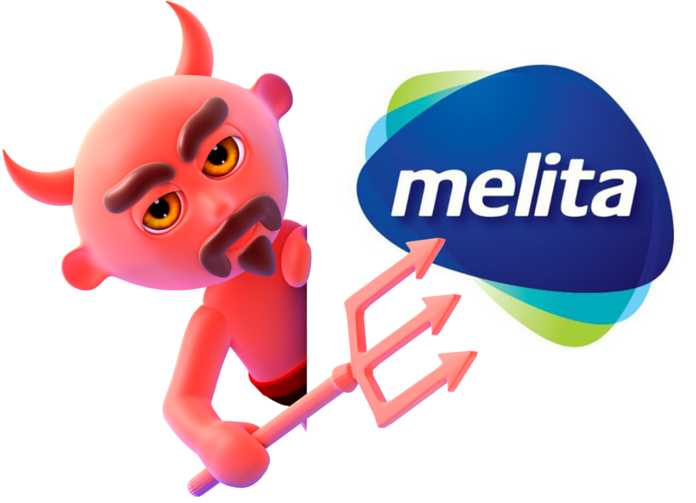 It’s no surprise that Melita has managed to (pardon my French) piss off many people – be it because of their horrible customer service, because of their tendency to overcharge people and send incorrect bills, or because of their often sub-par connection speeds, regardless of your Internet package.

I personally decided to finally switch away from Melita earlier this year, after getting fed up with all of the above.

But then there’s the big question – which provider should you go to next?

Unfortunately, there aren’t many alternative options available. In the whole country, there are essentially 3 Internet providers – Melita, GO and Vodafone – and we’ve already eliminated one of these, leaving us with only two.

As much as I personally like Vodafone, their customer service and most importantly their network speeds (which – in my opinion – beat any other provider by a mile), the unfortunate reality is that unless you only use the Internet for checking emails, you won’t want to limit yourself to a measly 5GB (or 12/22GB with larger packages) per month in bandwidth.

“Vodafone is definitely a cost-effective option, but only if you’re willing to tie yourself to the monthly bandwidth limit and pay high fees”

With that said, for the less demanding of you, who don’t often download large files or get stuck on 2-hour Skype calls, Vodafone may indeed be a viable option.

In comparison to Melita who charge €30 per month for their cheapest package, Vodafone Internet packages start from €10 monthly. Even their most expensive package, granting you 22GB in monthly bandwidth, is cheaper than Melita’s cheapest option.

As such, Vodafone is definitely a cost-effective option, but only if you’re willing to tie yourself to the monthly bandwidth limit and pay high fees* should you go over.

* At the time of writing of this article, Vodafone’s Terms & Conditions specify the charge of €5 per GB for over-usage.

Similarly to the other 2 operators, Vodafone requires you to sign a 2-year agreement in order to benefit from the good rates and get the Wifi Dongle for free. And needless to say, you do need the dongle!

This is great news to those not willing to commit for two years, or not knowing whether they’ll even remain on the island for that long.

Since it’s a mobile connection, there’s no set-up time at all.

Just go to a Vodafone outlet, sort out the paperwork, and off you go with a working wireless modem. It certainly can’t get any better than that.

In my experience, Vodafone has over the recent years improved significantly when it comes to the speed of their 4G network. If we also take variation (e.g. speed decline during peak hours) into account – their speeds are easily the best among the 3.

But being dependent on the mobile network, everything of course depends on your location. If you’re in a remote location then you should definitely test the speed first. You also need to take into account that your connection might get patcy during big events or other times when there’s a lot of mobile usage.

One of the main added benefits of mobile Internet is, of course, the fact that it’s … well … mobile!

Personally, I have a Vodafone Wifi Dongle for situations when I’m out at cafe wanting to get work done but their WiFi signal is bad or not working, and my wife uses it whilst commuting to get some work done on the bus.

Whilst I don’t use mobile Internet as my primary connection at home for the limited bandwidth reason and can therefore always keep the dongle in my bag or in the car, the device is the same for those who DO use it as their primary connection – you can just as easily pop it off the power (it has a battery, of course) and bring it with you where-ever you’re going.

Be careful not to take it with you when travelling, though – the roaming charges that you’d get hit with are horrendous!

But to those of you who are more like me and do want to enjoy unlimited bandwidth, there’s …

UPDATE – 01/08/16 – We were contacted by Vodafone, informing us that they’ve in fact started offering a Home Internet package with near-unlimited bandwidth (350GB per month). It costs €35 per month on a contract and includes a wireless home router. As they’re soft-launching the service, you won’t find ads for it on their website, but can reach out to them directly in case of interest.

GO is the operator that I personally went with after switching away from Melita.

Even though there’s not much choice for those who are fed up with Melita and can’t use Vodafone, let’s take a quick look at what they have to offer.

In terms of pricing, GO’s prices aren’t nearly as attractive as those of Vodafone, but quite similar to Melita’s.

Even though it initially looks like you’ll get a little bit less “bang for your buck” than you would with Melita (GO’s similarly priced packages usually offer lower speed), I would much rather pay for a 2Mbps upload speed and actually get 2Mbps (GO), than pay the same amount for 5Mbps upload speed but have a tenth of it during the busy hours of the day!

“This might sound a little bit silly, but they even cleaned up after themselves once they had finished!”

You may also like the fact that GO offers a €17 “starter package” – something that Melita doesn’t – to those who really don’t need more than the 15Mbps download speed. And let’s face it – unless you absolutely must get your movies in 3 minutes, rather than 6, the 15Mbps is actually enough for most people.

Similarly to the other 2, GO requires a 2-year contract.

What I found refreshing, though, was that they did indeed offer me a “contractless” package for around €8 per month extra.

I didn’t choose to go with it as I’m not intending to move (or switch providers) any time soon, but it’s nevertheless a good addition to have access to.

My personal experience with GO was actually quite good, but your mileage may vary, of course.

I’m the kind of person who hates few things more than having to take several hours of my day to go to some outlet and stand in the queue, almost as if I’m begging to give them my money. Because of this, it surprised me a great deal that we managed to go through the whole setup enchilada over email!

From there on, it took GO a couple of days to send over a technician with the modem and the paperwork, and everything was set.

This might sound a little bit silly, but they even cleaned up after themselves once they had finished! This is contrary to Melita, who found it perfectly acceptable to leave all the leftover cable bits and dust lying on the floor, and also deemed it a good idea to drill a hole for their cable without even covering it up with a box.

I’ve used GO for a tad over 3 months now, and the speeds are largely what I expected them to be.

Is the connection speed better than it was with Melita? Yes. Several times over and then some.

Am I actually happy? Not 100%, but then again living on a small island in the middle of the sea, with Internet connections in general being what they are, I don’t think there’s much room for complaining.

Good Intenet connectivity for decent prices is likely going to remain a large issue in this country for a long time. According to a long piece done by the Times recently, Malta’s broadband is the slowest AND the most expensive in all of the EU.

Any quick changes in this situation are unlikely, mainly due to Malta’s geographical location and the small population, but at least there is SOME competition – if just between the “big two” – which will hopefully lead to a continued improvement in both service, speed and prices across the board.

Got your own experiences with Melita, GO or Vodafone? Please share them in the comments below!

P.S. I hope I won’t get sued by Melita now. This would be a shame, especially with this being one of the site’s first articles. But then again, I bet there are thousands of people happy to testify that nothing that I’ve said about Melita above is false 🙂

Best of Malta: Where to Work with your Laptop?

Living in Malta on a Shoestring? Budget Hacks for Saving your...