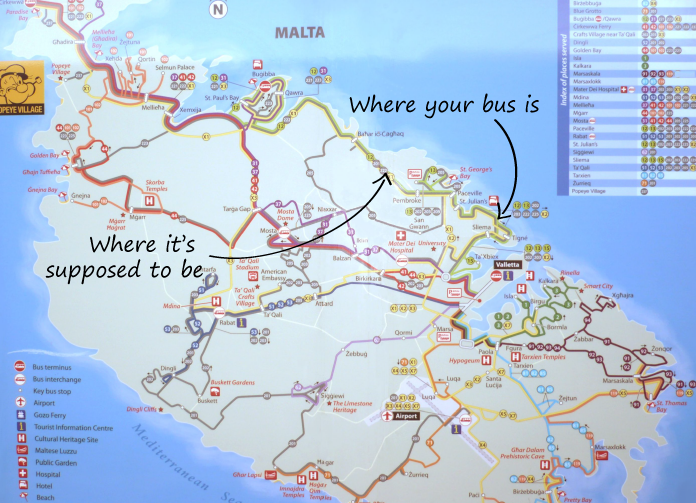 While considering a move to the rock, it’s tempting to think that it should be easy to get around without a car. After all, how ineffective can a bus system really be when there’s only 316 square kilometers of space that you need to cover?

As anyone who has lived here longer than a month without a car will tell you, the answer is: ridiculously ineffective.

Honestly, when even the drivers are in search of divine protection, what hope do we poor passengers really have?

It’s true that lately Tallinja has greatly improved its service. In particular, the Tallinja app manages to save time by telling you when a bus is (more or less) actually going to arrive. And to be fair, given the traffic situation in Malta, it’s amazing how well most drivers handle their jobs. However, as my experience earlier this year shows, there’s still a lot of room for improvement, especially when we’re just trying to get to work.

Where Do They FIND These Drivers?

It started out as a normal enough commute from Swatar to St. Julian’s. Thanks to the Tallinja app, I knew when my bus was supposed to arrive, and I watched as the 110 from Marsa to Pembroke Park and Ride pulled up to the stop. At this point, I had my first inkling that this bus ride would be one to remember. Before the driver could bring himself to open the doors, he sat there for a moment, staring out at the road. Then, taking a deep breath, he crossed himself.

Honestly, when even the drivers are in search of divine protection, what hope do we poor passengers really have?

Still, I had to get to work, and the 110 to Pembroke was the only bus that would get me there on time. I boarded. The bus jerked to a start, and I held on for dear life.
Thinking back now, I’m positively certain it must’ve been that bus driver’s first day. But while I was being thrown around curves and bends, and the horns were honking as the bus careened into traffic circles, all I could think was, “How the hell did this guy get a bus license?”

And then came the fun part. As the 110 approached the road along the Sliema coast, the bus, which was supposed to turn left toward St. Julian’s, instead took a hard, arm-wrenching right.

Any Excuse Will Do

For a good minute, the bus was completely silent. All the passengers glanced at each other, wondering if we were on the right bus. Then the Maltese ladies in the front let loose, asking the bus driver where the hell he was going.

“They changed the routes!” shouted the driver. (Spoiler alert: they hadn’t.) “They changed them this morning! I’m supposed to go to Sliema Ferries before turning around!”

“Ferries!” exclaimed one of the women. “Let me off here, then! It’ll be faster to walk to my stop.”

But the bus driver kept going, so the woman resorted to desperate measures by repeatedly pressing the stop-requested button. Finally, the driver let her off near Surfside. The rest of us watched as the woman crossed the street to the opposite stop, hoping to wave down the next bus to St. Julian’s. We waited for the bus to start moving again, but our driver was having a moment of crisis. He gripped the steering wheel and took a few deep breaths. And then—

With a few too many points to his three-point turn in the middle of Sliema’s coast road, he got the bus facing the right direction, and set off for St. Julian’s.

All Too Common Problems

That’s probably not even the most ridiculous thing I’ve seen while using Malta Public Transport. It’s almost hard to hate the bus system when you’re pretty much guaranteed to end up with a story every time you take it.

That said, so many of us rely on this system to get to and from work, or to get home in the evenings. At the very least, we should be able to trust that our drivers know where they’re going. Of course, there are things you can do to make your bus experience less painful (Related: How to Not Lose ALL Your Hair When Using Buses in Malta), but at the moment, don’t ever expect it to be completely painless.

Got a ridiculous Malta Public Transport story? Share your #busventures in the comments!

How Malta White Taxi Driver Ripped Me Off, Nearly Killing Me

Living in Malta on a Shoestring? Budget Hacks for Saving your...