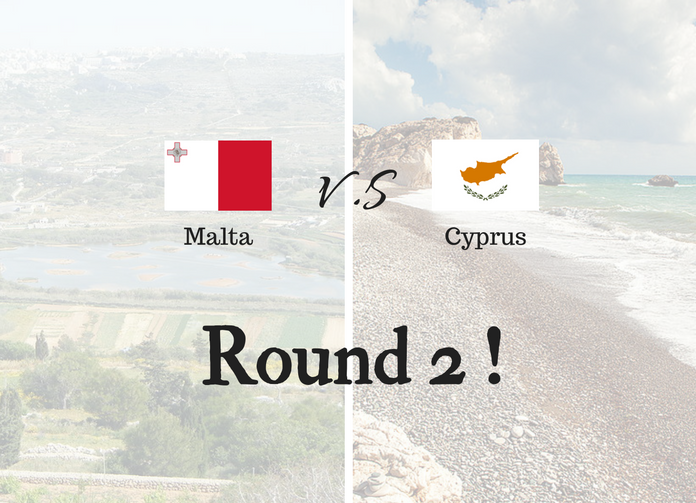 Some time ago we covered some of the similarities and differences between Malta and Cyprus in the Round 1 of our Malta vs Cyprus Fight.

Time for Malta vs Cyprus Round 2!

But it’s time to move on to more serious matters – from job opportunities for expats to bureaucracy and taxes.

Whilst my opinion is always going to be just that – an opinion – I’ve spent considerable time living in both countries as an expat, so I’ll do my best to give you my take on things, and hopefully make the choice easier for those who are choosing between the two.

This time around I’m going to compare Malta and Cyprus in 9 different categories, with the winner and the loser (or a tie) determined in each.

Most expats in both Malta and Cyprus tend to work either in the service industry (bars, restaurants, hotels) or in the iGaming industry.

The countries are comparable in both of these sectors. Even though English is not an official language in Cyprus, most tourist-oriented bars and restaurants are happy to hire people who don’t speak Greek.

When it comes to iGaming jobs, there are a large number of iGaming companies in both countries, but Malta quite clearly wins both in the number of firms and the number of vacancies at any given time.

Based on purely subjective research, my own experience, and that of some of the people I know, salaries also tend to be a little bit higher in Malta, making Malta the winner of this category.

With both Malta and Cyprus being Southern European countries that boast an extremely relaxed lifestyle, excessive bureaucracy and red tape can be fairly bothersome in both. Especially for people coming from Central and Eastern Europe who are used to high emphasis being put on efficiency.

Over the years, things have improved significantly in both countries, but excessive red tape still remains, especially when it comes to communicating with government institutions and banks.

The banking system, having originated in Colonial days, is very similar in both Malta and Cyprus (with perhaps the difference being the percentage of Russian money and Greek banks in Cyprus – but that’s a story for another day).

When it comes to communicating with various government institutions, Cyprus certainly wins in overall speed and efficiency (which isn’t great, but still beats Malta). However, it loses in a lot of government communication and forms being exclusively in Greek, whilst in Malta everything can be done in English as it’s an official language of the country.

Taxis in both Malta and Cyprus are fairly expensive and quite dreadful (Related: How Malta White Taxi Driver Ripped Me Off, Nearly Killing Me). Prices tend to be high, cars in varying conditions, and drivers often rude and prone to overcharging foreigners – tourists or residing.

But what Malta has that Cyprus doesn’t (at least when I was last there), is several large private taxi firms that have fixed prices, good cars, decent arrival times and polite drivers.

With both countries being tourist hotspots, there are plenty of possibilities to spend one’s spare time, from parties and clubbing to visiting beaches and going to museums.

Where Malta excels, though, is the compactness of the country. You can literally get from one end of the island to the other in less than an hour (unless there’s a traffic jam, that is), which means that nothing is ever too far.

Whilst Cyprus has, in some regards, a little bit more to offer than Malta (e.g. more sandy beaches), if you want to do something specific – such as visit museums – you’ll quickly find that it requires significant travel time, to get from Limassol to Nicosia, for instance.

The same also applies for partying. Paceville (the main party hotspot in Malta) is within a 30-minute drive from pretty much anywhere on the island, whereas Ayia Napa (the main party hotspot in Cyprus) is over an hour on the motorway from Limassol, an hour from Nicosia and nearly 2 hours from Paphos, making it unfeasible to “pop over for a few drinks and grab a taxi back”.

On the other hand, many expats who don’t have the opportunity to travel very often have reported that Malta’s small size makes it quite “dull” after a while. This is where Cyprus is a little bit better option, as one can pop over to the Troodos mountains (where you can even ski in the winter!), check out one of the many small fishing villages or even go to the occupied Northern side to see what life is like over there!

As such, it probably wouldn’t be fair to declare a winner, as both places offer their own unique blend of things to do and come with their own plusses and minuses.

First, it has to be said that both Malta and Cyprus are extremely safe places to be in. On the Global Safety Index, the countries rank at #17 and #21 respectively – second to only a handful of other European countries. In comparison, Greece ranks #43, the UK #54 and the United States a whopping #73.

But there’s more to it than just the global index. When diving deeper into the numbers, we notice that from 2007 to 2012, the number of robberies more than doubled in Cyprus, and the trend was similar in Malta. This is an incredibly unfortunate development, as even though violent crime is still super-low in both countries, muggings and robberies are on their way up, so it pays to be careful.

There isn’t a clear winner in this category, as even though Malta ranks a notch higher than Cyprus, the differences are minuscule.

Leaving aside business taxes (which are a whole different story), the tax systems of Malta and Cyprus are relatively similar, in that both countries have a progressive income tax system (the more you earn, the more you pay), and a fixed National Insurance / Social Insurance tax.

National Insurance in Cyprus is a flat 7.8%, whilst in Malta it’s 10% (with some exceptions).

But enough of percentages. How much money will you really pay in taxes?

For an employee making €20,000 a year gross (a fairly standard salary in both countries for an entry-level professional), you would take home €18,340 in Cyprus, or €15,815 in Malta, making Cyprus a very clear winner in this regard.

If you’re a fan of low-cost airlines, then both Malta and Cyprus are equally great places to be in! Due to the touristy nature of the countries, RyanAir and EasyJet run tons of flights to a lot of European destinations.

Malta seems to be winning in this regard, though, as Ryanair have a lot more destinations from Malta International Airport than they do from Larnaca and Paphos airports combined.

Malta also has its national airline – Air Malta – that flies to 28 European destinations. This is something that Cyprus can’t compare to any longer since Cyprus Airways unfortunately went bust a few years ago.

It’s also easier (for most) to reach the airport in Malta than it is in Cyprus. In Malta, you can grab a bus or a taxi from almost anywhere and reach the airport in 30-45 minutes. In Cyprus, unless you live in Larnaca or Paphos, getting to an airport can be quite a drive.

Getting Around – Public Transportation

Even though constantly improving, the bus network in Malta isn’t great (Related: Only in Malta: When Public Transportation FAILS). The island is super small, but the road infrastructure just isn’t there, making it super difficult to run an efficient bus service.

Cyprus, on the other hand, is a little bit different. Whilst Malta can be considered a “big town” for all intents and purposes, Cyprus has multiple towns and the distances are often significant. Because of this, we’ll have to look at inter-city transport and inner-city transport separately.

Like Malta, the only public transportation in Cyprus is buses. Back when I lived in Cyprus about 5 years ago, bus service both between towns, and within Limassol and Larnaca was – simply put – dreadful. Things have, however, improved significantly, and one can nowadays catch a bus between any of the major towns without too much of a hassle. Based on reports, inner-city transport in bigger towns is also quite decent nowadays.

When it comes to Malta, most people who have lived here for a while know that things aren’t exactly in the best shape when it comes to Internet connections. Or as the Times of Malta put it, “Malta’s broadband is slow, most expensive in the EU“.

This, actually, seems a little bit off, as looking at Melita’s (one of Malta’s largest ISPs) website, they’re offering a basic 50mbps package for €27 per month. Looking at Cytanet’s (the largest ISP in Cyprus) offerings, we can see that a 50Mbps connection sets you back a whopping €52 per month – making it nearly twice as expensive!

We’re not going to dive into the “advertised vs actual speed” discussion here, as a lot of it would be overly subjective. Those who have lived in either Malta or Cyprus also know that a lot depends on your luck, as things can be either perfectly fine or absolutely unbearable.

We’ve now compared the two countries in 17 different areas throughout Round 1 and Round 2, and have hopefully helped at least some people who were thinking of whether to move to Malta or to Cyprus.

So who’s the winner?

If we look at purely the numbers, then Malta won in 7 categories, Cyprus in 5, and another 5 were tied. But personally, I believe there’s no winner or loser to be declared.

As has become evident (I hope), both countries have A LOT to offer to expats, and whilst some things are “better” in one and others in the other, at the end of the day it all depends on what you’re after.

Personally, I couldn’t live without easy access to an international airport, but don’t care the slightest about nice beaches, whilst some other people may travel only once a year, but spend 2 days a week on the beach. It’s all individual.

There’s also a lot more to both of these wonderful countries than can be put into two little articles. With this in mind, I’d highly recommend anyone serious about relocating to either country to pack your bags, come over, and see for yourself.

As I said before, a lot of this is my personal experience and subjective opinion, so your mileage may vary.

But please let me know in the comments below what’s your opinion of it all, and which of the two countries is the winner FOR YOU and why!

Moving to Malta vs Gozo – One on One Comparison

Only In Malta: When Public Transportation FAILS

Malta vs Cyprus for Expats – The Fight is ON!

Don’t Get Screwed By Your Landlord! 9 Useful Tips for Renting...