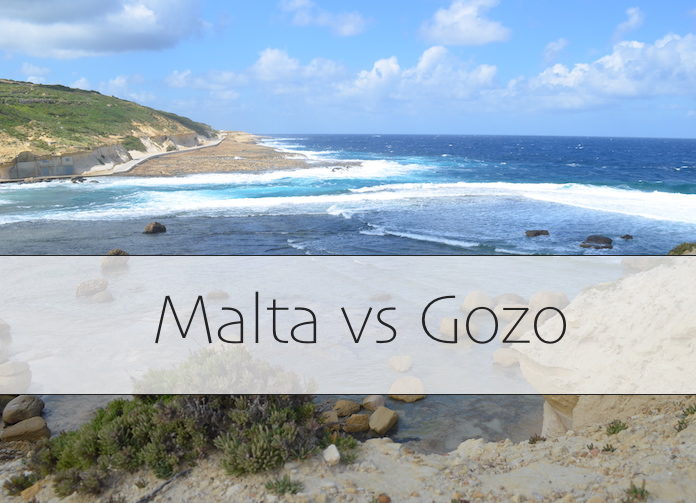 Many foreigners who are thinking about moving to Malta for reasons other than work tend to seriously consider between Malta and Gozo as the first step. This included us when we first moved to the island in 2014.

As someone who’s lived both in Gozo and Malta, here’s my take on the quality of life in Malta vs Gozo, split into 10 categories.

One of the first things that most people notice when they first go to Gozo is that it’s stunningly beautiful. I’m not implying that Malta isn’t, but few can honestly say that they believe Gozo isn’t much prettier than its ‘big brother’.

With much less (over-)development than in Malta, Gozo has retained a lot of naturally pretty sights, from large fields to hills and ravines. Our flat in Marsalforn had a view to the bay from one end and to a green field from the other – something you can’t find in many places in the world without breaking the bank.

Someone who’s just arrived in Malta might not easily notice the difference between the Maltese and the Gozitans. They speak the same language, eat the same food and follow the same traditions.

But once you’ve gotten to know some people, it becomes evident that Gozitans are different from the Maltese in many (mostly subtle) ways. Generally speaking, Gozitans tend to be far more “down to earth” than the Maltese. With Gozo being a much smaller place, this is expected.

This can be either good or bad – depending on the kind of person you are.

One of the reasons we initially chose Gozo over Malta is the fact that you simply get far more “bang for your buck” when it comes to renting.

To give you an idea, we were renting a beautiful, brand new 3-bedroom flat with amazing views in Marsalforn for 620 Euros a month (and were told that we’re overpaying!)

In comparison, we paid €900 a month for a flat in Mosta, which was equal to our Gozo flat in many regards but didn’t have the view or a garage. And Mosta isn’t the most expensive area in Malta, either. Go to Sliema or St. Julian’s, and the prices go further up by quite a margin.

There’s also FAR less demand for rental properties in Gozo than in Malta, making good apartments easier to find. In Malta, it’s typical for a reasonably priced flat to sell in a matter of days, so unless you put your deposit down right away, you’re out of luck. In Gozo, it’s much more relaxed.

This is an area where Gozo, unfortunately, can’t compete with Malta, and one of the main reasons why we moved away to the “main island”.

With Malta having only one airport, international travel of any kind requires a trip to Luqa (unless you’re going to Italy on a ferry, that is). Even though Gozo isn’t far and the ferry only takes 25 minutes, this adds up to a significant time. From our home in Marsalforn, it took me a total of around 1.5 – 2 hours to reach the airport by car. Use public transportation and it can be upwards of 3 hours IF all buses are on time.

But to make matters even worse, the above is assuming that everything goes well. The reality is, however, that ferries sometimes (although rarely) don’t go, sometimes they take the long route over Comino (increasing travel time by an hour), and in the summer, you’re in the ferry queue together with hordes of tourists, meaning that you’ll often only get onto the 2nd or even 3rd ferry.

This can be a nightmare when travelling, as unless you want to risk missing your flight, you need to pretty much leave your home at 9 in the morning in order to catch an afternoon flight.

Needless to say, Gozo is much smaller than Malta, and this also shows in terms of services. If you’re the kind of person who needs multi-screen cinemas and huge shopping malls in order to survive, then Gozo is probably not for you.

This isn’t to say that there’s a lack of services, though. Personally, I found Gozo to have nearly everything I needed for everyday life. There’s pubs, there’s a cinema, there’s a bowling hall, and there’s several decent grocery shops. It’s just that the selection is much smaller than in Malta.

I did find myself going to Malta every now and again to get more specific things, though.

For someone who’s affected by claustrophobia, Malta and Gozo are both pretty bad choices. The country is tiny, and sooner than you know, you’ll have seen the majority of things worth seeing and been to the majority of places worth visiting. Many people like it, but others get anxious. As someone who travels a lot, I tend to quite like the “compactness” of both Malta and Gozo, as I know that I can get out often.

Gozo, of course, is even smaller, so if Malta is too small for you then Gozo would probably be absolutely unbearable.

I’ve only got one thing to say: if you’re thinking of moving to Gozo and not getting a car, think again.

With the island being super-small, this was exactly what we had in mind. Fast forward 2 months – there I was, in the queue at a car dealership, getting myself a car.

Unless you’re a fan of planning your day around public transportation schedules, having a car is an absolute must in Gozo. Getting from most places to most other places by bus requires a connection in Victoria, and with many bus routes only going once an hour, “popping into an office 10km from you” can easily turn into a 2+ hour journey.

There’s also no decent taxi service, apart from the white taxis which tend to be available only sporadically and charge a fortune, so you really do need a car when moving to Gozo.

One great thing about Gozo, though, is that driving is far less stressful than it is in Malta, due to fewer traffic jams. In most cases, it takes you 15 minutes at most to get from any place on the island to any other place. The only place where I’ve seen traffic jams is in central Victoria, and even this only tends to happen during peak rush hours.

Ah, the bureaucracy. Regardless of whether it’s Malta or Gozo, this is one thing that you can’t escape.

A good thing is that there’s an “out-office” of most government departments readily available in Gozo. Only very few things require you to travel to Valletta.

Bear in mind, though, that for a lot of things, the Gozo departments need to send your documents over to Malta and get them back from Malta by post. This can increase processing time for certain things, but overall I’ve still found paperwork to be quicker and more efficient in Gozo vs Malta.

I’ve heard a lot of people claim that Gozo is significantly cheaper than Malta. Personally, I don’t think this is overly accurate, as if you leave out things like accommodation (covered above), you’ll find that mostly everything else costs the same as it does in Malta.

We can’t, of course, compare Marsalforn prices to those in Sliema. But a pint of beer or a loaf of bread in Sannat (Gozo) is likely to set you back the same as it would in, say, Mosta (Malta).

Other prices like bus tickets, petrol and dining out tend to also be similar to what you’d find in smaller towns in Malta.

One thing worth noting is the fact that, living in Gozo, you’ll inevitably end up spending some money on the Gozo ferry tickets. The good news is that once you’ve registered yourself as a Gozo resident, the single round trip passenger fare jumps down from €4.65 to a measly €1.15, and the car+driver fare from €15.70 to €8.15.

Gozo’s biggest drawback for those moving to Malta for work is the lack of job opportunities. Whilst lacking exact data or personal experience, it can be safely claimed that over 95% of all employment opportunities exist in Malta.

This isn’t the case for just foreigners, either. Try taking the 7am ferry from Gozo to Malta, and you’ll notice it is full of Gozitans who are on their daily commute to Malta, just to get to their workplace. Lack of job opportunities is a big issue in Gozo, and with very few international companies setting up in Gozo, the odds for an expat to find decent work in Gozo are, unfortunately, very slim.

There are, of course, bars, restaurants and other service establishments where one could source work, but even then it’s largely an exception, rather than rule, as unless you’re looking for a temporary gig for the summer, it’s likely that most places won’t need any outside help.

As you hopefully noticed, Gozo has a lot to offer compared to Malta, but also comes with its (sometimes severe) limitations. Personally, I would prefer living in Gozo over Malta any time of the day, if it wasn’t for the travel issues, but different people are looking for different things, so a one-size-fits-all answer to “where’s better” is quite impossible to come up with.

What are your own Malta vs Gozo thoughts? Let me know in the comments below! I’m also happy to answer any specific questions you may have about living in Malta or Gozo.

The Curious Numbers of Malta