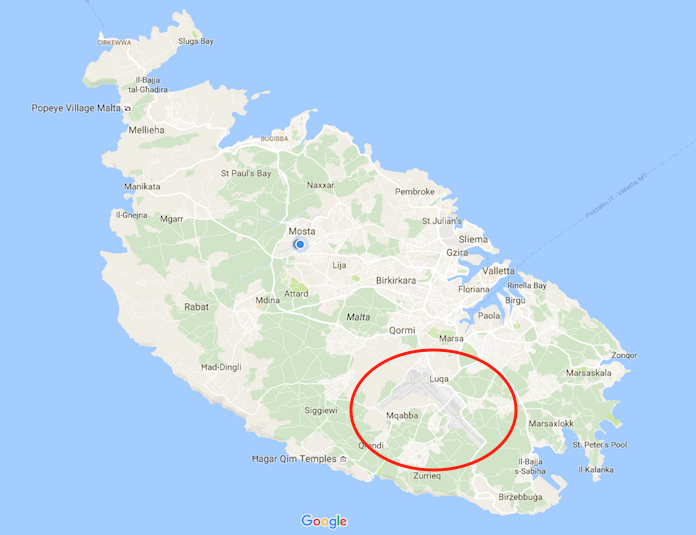 It shouldn’t come as a surprise to anyone that Malta is a VERY small country.

But ‘small’ is quite subjective. Estonia is also a small country by most standards. As is New Zealand, according to some. But these countries ae 143 times and 848 times the size of Malta, respectively.

So let’s put things into perspective by a few practical examples of how small Malta really is.

The image above is an extract from Google Maps, showing the entire island of Malta. It doesn’t show the sister island Gozo, but that’s even tinier.

Notice the bit that’s been circled in? That’s the Malta International Airport with its 2 runways.

As you can see, it forms a significant part of the whole island. And no, MIA doesn’t have an incredibly long runway. At 11,627ft, it’s actually quite standard.

Fun fact: If you took the longest paved runway in the world (Qadmo Bamda Airport in China / 18,045ft) and put it in Malta, you’d only need three of those to cover the whole width of the country.

Spread of Amenities in Malta

Clearly, there’s only one airport in Malta. Any more would be both impractical and physically impossible. But how many public hospitals would you assume Malta has? What about multi-screen cinemas? Or garden shops larger than an average garage? Or bowling alleys? The list goes on.

Those numbers seem a bit low for the whole country. But do we need more? Not really.

The mistake that most newcomers make when coming here is looking at Malta as a typical country. Instead, look at it as one city, as for all intents and purposes, that’s exactly what it is.

The whole of Malta can be considered one metropolitan area, and even though there are a countless number of towns, the distance between them is minuscule and therefore, even driving to the other end of the country to go to the cinema, visit a government office or play some bowling doesn’t take a huge effort.

Malta in Comparison to Other Countries

Even though we’ve established that Malta should be looked at more in terms of a decent-sized city, rather than a country, let’s compare the size of Malta to some other countries.

Out of all the countries and sovereign states in the world, Malta is 186th of 195 total – or the 10th smallest. Among the 49 European countries, Malta is the 5th smallest – just behind Vatican City, Monaco, San Marino and Liechtenstein – all of which are city-states, further supporting the rationalism of the “city, not country” view.

This is nearly two thousand times the size!

Malta is an incredibly small place indeed, but this doesn’t necessarily mean that it’s lacking anything.

Sure, the supermarkets aren’t nearly the size as they are in most other European countries and you may not have that much choice in choosing your barber, but the small size of the country also has a ton of advantages.

Not only does it take an hour’s drive to reach any point in the island from any other point (unless you get caught in traffic), the smallness of the place also means that the population is less spread out than elsewhere, and it’s therefore very easy to keep in touch with friends.

The Curious Numbers of Malta

Moving to Malta vs Gozo – One on One Comparison

How to Open a Bank Account in Malta Without Losing Hair

Malta 101: Which Town Should You Move to?